Heidel, Wult warrior princess, is having a bad day.

First, a pack of wraiths chased her from a dragon’s vault. Then, the thief she traveled with, Maveryck, who was supposed to be a professional, lost the staff they stole. Instead of reclaiming it, he created a portal that sucked them into a nightmarish world full of noxious fumes and mechanical beasts. Earth.

To make matters worse, Heidel is now stuck with the incompetent thief in Paris, France, and they have no way to get back home. As if that wasn’t bad enough, Maveryck is keeping secrets from her—secrets about his past and his identity. Plus, he’s far too attractive to be trusted. She’s been on hellish quests before, but nothing has ever been more difficult than guarding her heart. And she’s pretty sure she’s going to fail. Miserably.

Tamara Grantham is the award-winning author of more than half a dozen books and novellas, including the Olive Kennedy: Fairy World MD series and the Shine novellas. Dreamthief, the first book of her Fairy World MD series, won first place for fantasy in INDIEFAB’S Book of the Year Awards, a RONE award for best New Adult Romance of 2016, and is a #1 bestseller on Amazon in both the Mythology and Fairy Tales categories with over 100 reviews.

Tamara holds a Bachelor’s degree in English. She has been a featured speaker at the Rose State Writing Conference and has been a panelist at Comic Con Wizard World speaking on the topic of female leads. For her first published project, she collaborated with New York-Times bestselling author, William Bernhardt, in writing the Shine series.

Born and raised in Texas, Tamara now lives with her husband and five children in Wichita, Kansas. She rarely has any free time, but when the stars align and she gets a moment to relax, she enjoys reading fantasy novels, taking nature walks, which fuel her inspiration for creating fantastical worlds, and watching every Star Wars or Star Trek movie ever made. You can find her online at www.TamaraGranthamBooks.com. 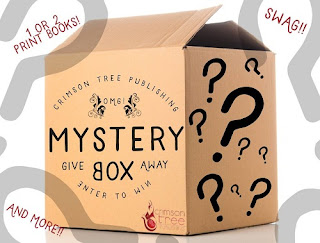 Giveaway Details:
There is a tour wide giveaway. Prizes include the following:
winner will receive a mystery box from Crimson Tree Publishing.
Giveaway is US Only.
Ends December 30th at 11:59 PM ET