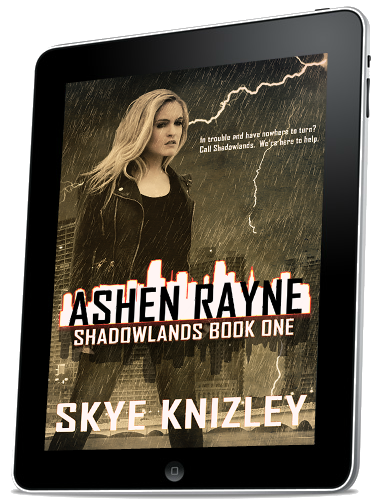 Young women are vanishing from Miami’s club scene, most disappearing without a trace, others found suffocated in plastic bags, their battered corpses filled with a deadly cocktail of narcotics.
There are no suspects and few clues.

When exotic dancer Rayne is taken, her sister Blaze calls the ladies of Shadowlands to find her.

With only five days before Rayne is found dead or never found at all, Smoak and Ash dive into Miami’s underworld of drugs, prostitution and slavery, using every skill they have to find her before the clock runs out.

In trouble and have nowhere to turn?

Smoak arrived in North Beach nearly half an hour after leaving the apartment. The lunch rush had been murder on Alton Road, and she’d been forced to wind her way through traffic, which did nothing to improve her mood.


Murphy lived in a large condominium complex with views of both the ocean and the not too distant skyscrapers of the city proper. Each of the condominiums within the complex were two stories tall with four apartments per building, two on the top and two on the bottom.

Murphy’s residence was on the first floor with a walk out to the harbor beyond the complex. Smoak parked her bike on the street in front of his building and walked toward his door, her hands in her jacket pockets.

Detective Murphy answered the door after Smoak’s third persistent ring of the doorbell. He was messy-haired and stood bleary eyed in his boxers, the fly hanging open.

Smoak lowered her glasses. “Hey, Murphy, long time no see. I’d hoped Mr. Higgins had buried you under a bigger rock, but here we are, just like old times.

Do you have a minute for a friend?”

Murphy stared for a moment then pushed the door shut in Smoak’s face. She could hear him moving around inside and knew he was getting ready to run. She leaned back and kicked the door, popping the cheap lock with the heel of her boot. She followed through and glanced around the wide entryway. Murphy had knocked over two dining chairs in his haste. He’d also broken a glass coffee table in the next room and now stood amidst the glass, trying to put on a pair of pants and not cut his feet at the same time.

“What’s the problem, Murph?” Smoak asked. “I just want to ask you a couple questions. You act like I’m trying to sell you Amway.”

Murphy buckled his belt and backed away, reaching for the sliding door. “I’ve seen your military record, MacKenna. You aren’t here to ask any questions, they sent you to kill me!”

Smoak spread her hands to show they were empty. “What are you talking about? No one sent me. I’m looking for Rayne Nightingale, and I think you might have been one of the last people to see her. I just want to talk. Gaia, what has you so spooked?”

“You’re not here to kill me?” Murphy asked.

“Of course not! What kind of idiot kills a cop in his own place?” Smoak asked. “I’d wait till you were getting donuts…”

A shotgun blast ripped through the apartment door, breaking the hinges and knocking Smoak off her feet to fall in a heap among the dining chairs.

“Detective Murphy,” a man said in a Russian accent. “Gregor has decided it is time for you to retire.”

Smoak heard the sliding door open and the breaking of more glass, combined with the report of another shotgun blast. She gritted her teeth against the pain in her back and stood, drawing her knives as she rose. A large man, his broad chest and muscular arms covered in tattoos, stood in the doorway, a tactical shotgun clutched in his beefy hands.

The man leveled his shotgun at her and sneered. “Too bad, girl. You brought knives to a gunfight. Move out of the way, and you won’t get hurt.”

“Not the first time,” Smoak replied. “Drop the shotgun and lay down on the floor with your hands on your head.” 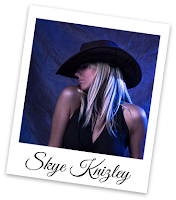 Skye Knizley lives officially in the middle of nowhere. Really, it is.
When at home she spends her time writing urban fantasy novels including the best-selling Storm Chronicles series and the Midnight Roads, a series loosely based on her own travels around the country. Her debut ‘Chronicles novel, Stormrise, struck gold less than twenty four hours from being unleashed on an unsuspecting public, hitting best seller status in three categories in the US, UK, Australia and Canada. Her additional novels have all followed suit and she has no plans to stop writing any time soon.

If she’s not setting quill to parchment Skye can be found hiking with her Siberian Husky, camping, motorcycling, ghost hunting, or gaming.

Skye is a proud Wicca, musician and gamer girl and will happily discuss any of those topics. And no, practicing Wicca doesn’t mean she dances naked around stone circles. As far as you know.


Giveaway is US only.
a Rafflecopter giveaway