From best-selling author Shannon A. Thompson comes an exciting new duology in the Bad Bloods universe.

Sixteen-year-old Caleb has been called many things: a patient, a musician, even a prostitute…now he has a new name—son. After his identity is uncovered, Caleb bands together with the family he once rejected in order to save the city of Vendona. But it won’t be easy. Enemies wait around every corner—and so do harsh realities. With Violet and Kuthun by his side though, nothing seems impossible. As Vendona sits on the verge of an economic collapse and a massive hurricane threatens the city, Violet and Caleb must show its citizens how to overcome decades of hostility and division to save themselves.

Standing or not, a sea will rage, a wall may fall, and all will depend on immortal pain and sacrifice.

Everyone in the Pits called the fifteen-year-old Skeleton, for obvious reasons. Supposedly, the bad blood had been born a normal, healthy baby boy, but, over time, his skin unraveled and revealed pieces of bone. Somehow, defying all science, the boy continued to live. The last time I’d seen him, his right arm and chin showed bone, but now, half his face and all his fingers had contorted to the haunting shape. Even Adam cringed.
“You here to fight?” Skeleton asked, eyeing both Adam and me.
I attempted to answer, but Adam shouted over me. “You work here?”
The betrayal Adam felt was one I would never comprehend, even if I wanted to. Adam was a bad blood. To see a fellow bad blood protect the Pits that killed his kind went beyond my human pain. I volunteered to fight. Bad bloods often didn’t. Moments like this reminded me why Kuthun slapped me when I told him I wished I was a bad blood. Just because I sympathized with them and loved them, lived with them and listened to them, did not mean I would ever be one. I could never feel the same emotions Adam did, and Adam couldn’t comprehend mine.
“The humans aren’t the only ones who see value in bad blood.” Skeleton egged Adam on, and Adam fell for it.
“You mean, your blood.”
The boy’s bony fingers rattled against the door. “Of course,” he said, then smiled. The addition of teeth only made the bony boy look worse.
“You’re one of us,” Adam snapped. “How could you—”
I stepped in front of my cousin. Thankfully, my actions stopped him. “We’re here to talk to Connelly,” I said.
The lanky, crass kid looked me over and stepped aside, but as we passed, he gave in to temptation. “If you need a tag for the bad blood, let me know.”
Adam knocked the boy out cold before I could stop him. That was how fast his powers worked. And, for once, I didn’t feel the need to reprimand him.
“You know you have to fight if you hurt the workers,” I said.
“No one will know,” Adam said as he strode past me. “You’re good at keeping secrets, right?”

If you’ve read the first duology in the Bad Bloods universe, then you already know how crazy, wild, and wonderful a bad blood can be. (Book 1 is free across all platforms right now.) But if you don’t know what a bad blood is, a bad blood is a person with hindering abilities. Think X-Men, but the powers come with serious ramifications. Want an example? In the latest duology, Violet is a fourteen-year-old girl who can turn into a shadow…but she often loses herself to darkness and time, so she struggles to form back into a person. Because of her shadowy nature, she also has a hard time identifying as individual rather than simply following anyone she latches onto…like a shadow.
Here are the top ten bad bloods you’ll meet for the first time in the new Bad Bloods duology, July Thunder and July Lightning. Check out the Pinterest board for more inspiration!

Levi (13): He’s described as a seedy sailor, with curly blond hair and skin that…glows. He might be closer to an eel. And his powers include cleaning water.
Kuthun (18): A love interest in the book, Kuthun sees the strings of fate…even the strings of those who have died long ago.
Kat (15): Between her night vision, her sharpened claws, and her black-white-red hair, Kat might as well be a calico cat. Even cats mistook her and sheltered her from a young age.
Skeleton (15): Skeleton works in the Pits, an underground fighting ring, but his name should be taken literally. He’s slowly defying all science by turning into a skeleton…and remaining alive.
Nuo (17): Nuo grew up with our protagonist Caleb, but her powers can make you repeat, repeat, repeat until whatever action you’re doing kills you.
Hanna (16): She might be bald, but she can grow anyone else’s hair. And dye it, too.
Ellen (9): She glows like a lighthouse, but after burning her own eyes, she cannot see the night she turns into day.
Plato (7): Plato might have a glass heart…because he can turn sand into glass right before your eyes.
Yasir (15): Do you like jewels? This is your guy. He can change anything into a gem…including his own eye, which is now a sapphire.
Britney (8?): Her age is a mystery for a reason. Her powers, too. Revealing either could kill us all. 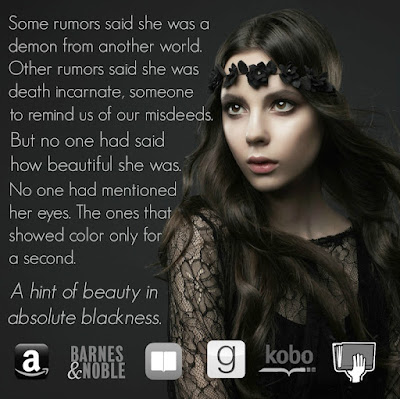 Author Bio:
Shannon A. Thompson is a young adult author, avid reader, and a habitual chatterbox.

As a novelist, poet, and blogger, Thompson spends her free time writing and sharing ideas with her black cat, Bogart, named after her favorite actor, Humphrey Bogart. Her other two cats bring her coffee. Between writing and befriending cats, Thompson graduated from the University of Kansas with a bachelor’s degree in English with an emphasis on creative writing, and her work has appeared in numerous poetry collections and anthologies. Represented by Clean Teen Publishing, Thompson is the best-selling author of The Timely Death Trilogy and the Bad Bloods duology. When she is not writing, she is climbing rooftops, baking cookies, or watching murder shows in the middle of the night, often done with her cats by her side.

Visit her blog for writers and readers at www.ShannonAThompson.com. 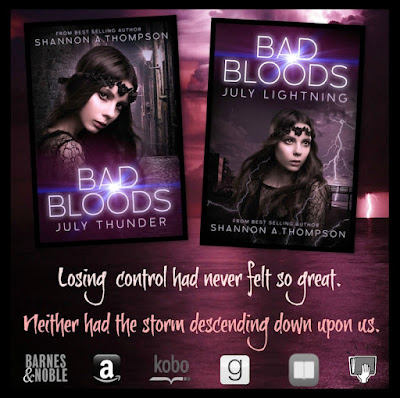 OMG, What can I say about this book.....Just , just, just.......absolutely AWESOME!! Thompson spared us no secrets in this book. In fact many secret from July Thunder were revealed. These characters, new and old, were still phenomenal. I loved learning about Caleb and Violet. Their love for one another and the others were incredible. The story-line was magical. I could picture everything that happened with clarity and the words just seemed to flow off the pages as I turned them. There were some feelers in this story too and I do advise some tissues while reading. I highly recommend this read to all to enjoy. 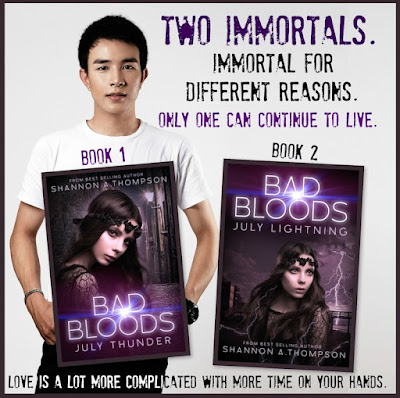 Today we’re talking to Caleb and Violet from the Bad Bloods universe by best-selling young adult author Shannon A. Thompson. For those who don’t know, Bad Bloods is a generational duology series, which basically means every two books will be told by different characters. Each set also focuses on a new political movement. July Thunder (4/10) and July Lightning (5/1) is set in 2090, so it will deal with the aftermath of the first duology (November Rain and November Snow). It will focus on the wall separating the Highlands and the outskirts. If you haven’t started this series yet, don’t worry! November Rain (book 1) is free across all platforms.
For more information, visit www.ShannonAThompson.com.
But now, our interview with Caleb and Violet.

Interviewer (I): Let’s start with something fun. What’s your favorite food?
Violet (V): Pie. Cupcakes. Anything with chocolate. I have a huge sweet tooth.
Caleb (C): Seafood. But that’s because I like fishing.
V: And the island.
C: Ha. Yes, and my island.
I: An island off the coast of Vendona plays a huge role in this new duology. Not only is it undiscovered territory for Bad Bloods readers, but it’s unknown to most Vendona citizens as well. Am I correct?
C: Yes. My island is off the gulf of Eastern Vendona, a largely frowned upon place even in the outskirts. Vendona is a…complicated place. Not only is it isolated from the rest of the world—unless you’re rich, of course—it also has barricades within itself. The outskirts is separated by cardinal directions, though there’s no physical barrier.
V: But there are also physical barriers in Vendona. There’s a fence in Shadow Alley—my infamous spot—that cuts off most of Western Vendona after the Western Flock was massacred thirteen years ago. And the whole city is separated into two main parts—the Highlands and the outskirts. A steel wall is placed in between them.

I: The ten-story wall that separates the Highlands and the outskirts is center to your tale. Why?
V: Well, most people want it taken down. And with Marion Lachance’s help, even Highlanders are beginning to protest the barrier. It’s outdated.
C: Or never should’ve happened in the first place.
V: That, too.

I: So how do you two get involved with the movement to pull the wall down?
C: I wouldn’t put it that way…but it was more or less an accident.
V: Almost everything in Vendona is.
C: (nods) It’s easy to get caught up in everything, even when it’s completely out of your control. The best thing you can do is try to survive.
V: And do the right thing.
C: (frowning) The right thing isn’t always what I agree on, because the right thing often takes sacrifice. Vendona will take everything from you if it can. I won’t let that happen.

I: Sounds like you two have different ideas about what is right and wrong.
V: I think we just have different approaches.
C: I think I’d argue anything she says.
V: (glare)
C: (smirk) But she’s probably right.

I: So, tell us about one another. What was your initial reaction of the other?
C: (soft laughter) Violet was…terrifying as she was beautiful.
V: Caleb was an ass.

Favorite weather:
V: Nighttime?
C: That’s not weather.
V: Then calm nighttime. Kind of windy. Enough to fly on.
C: (sigh) I like storms. Most of the time.

Biggest fear:
V: Losing myself.
C: Losing my loved ones.
I: If there is anything you want readers to take away from this story, what is it?
V: To step out of your comfort zone. I spent most of my life in shadows. Learning to live in the spotlight is another challenge entirely. Well worth the adventure.
C: To be honest, open. To embrace connection with others when you’re used to closing yourself off.

I: Great answers. Thank you for talking with us tonight!

To learn more about Violet and Caleb and the wall separating their city, check out the latest duology in the Bad Bloods universe.